It was very much hectic weekened for me, dirving around 300 km on bike (to & fro to native place) and meeting many relatives at the 11th day ceremony of my grand father. come across differetn set of people with different life styles and views. Wanted to post a big blog today on the trip but help up with lot of work to do that.

I was thinking of my blog and comparing with some other blogs, I think my blog will never be interesting. there is not much stuff into it which could entertain other people. I just want to remind myself of my thoughts and thought blog could be a nice media to do that.

There is lot of stress (as it has been) around. lot of commitments and less energy and time. one cause of me gettings tressed is that while attending to my commitments, i always expected something, interestingly they might not be met which will cause more confusion and stress. Am i in the right path? or am i doing right thing? a question that eats my mind severly some time.


There is one interesting observation about me, i was feeling a kid (or dependant on parents etc) for most of my life,and all of sudden lot of FF(fast forward) happened and now I became a responsible person to take care of parents, brothers etc. Am i missing a normal life? just wondering. for sure i need to reduce expecations on others and need to have more socialization with my own self. Got to concentrate more on tech stuff which could get me rid of the stress that is getting accumulated. need some emotional relaxation. Got to learn feeling comfortable with the existing system, but at the same time, i will never be happy to die without making some different in this world. so there are going to be tough times ahead, and i am looking forward positively.
Posted by Hari Mallepally at 10:44 PM 1 comment:

A disciple is like a new moon,
in reality no different than the full moon:
its apparent imperfection is a sign of gradual increase.
Night by night the new moon gives a lesson in gradualness:
with deliberation it says, "O hasty one,
only step by step can one ascend to the roof."
A skillful cook lets the pot boil slowly;
the stew boiled in a mad hurry is of no use. 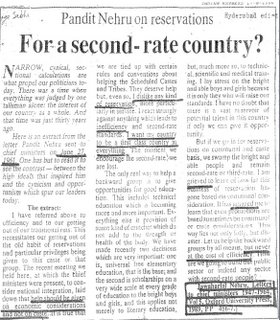 Look what Nehru said against Reservation....and Now Congress doesn't care about their own principles, just for the sake of Votes...
Posted by Hari Mallepally at 8:56 PM No comments:

Everything is nothing ...Nothing is everything..

There are few words in the English language to adequately the various states of ecstasy and self realization which one can experience. The all-encompassing term commonly used to describe the advanced states of consciousness exhibited by such great sages as the Buddha, Paramahansa Yogananda, and others, is Samadhi. But there are thousands of Yogis (those who seek union with God) in the world who experience this great state of peace and enlightenment. Anyone who is sincere in their practice and desire to see God has the hidden potential to dip into this remarkable state of consciousness.

In the Kriya Yoga tradition, Samadhi is a physical state of suspended animation, where breathing and heartbeat are stilled, accompanied by a focused mental state that facilitates profound insights into the true nature of reality. Samadhi can be triggered by prayer, meditation, kriya/chakra/tantric yoga, self-sacrifice, good works, near-death experiences, and more. Few Western religions prepare one for such an experience, and those who are blessed with it are often described as having undergone tremendous agony and sacrifice. But this is not necessary. One can turn to Eastern religions which have studied the subject in a more scientific manner, documenting which practices help the experience, and which ones to avoid.

Most people see Samadhi as unobtainable - they feel they are not "religious" enough, physically fit enough, or have too many worldly habits. The Kriya Yoga practices help us to deal with and overcome these human frailties. Many people begin to experience periods of breathlessness after about 2-3 years of intense practice of Kriya Kundalini Pranayama. Know that Samadhi is attainable!

Popular Kriya Yoga lessons and literature seem to get people thinking of Samadhi and self-realization as one and the same thing. True self-realization might take 30 years of intense practice, but Samadhi does not. Samadhi is the medium for attaining self-realization. The great Master Yogananda says to enjoy the periods of breathlessness that follow Kriya Kundalini Pranayama. And that is exactly what should happen.

It usually takes some personal instruction to get beyond the initial stages of Samadhi. Yogananda talked about his techniques as a method for building and tuning a sensitive radio for communicating with God. The point missed by many is that, once you build and tune the radio, you should listen to what God is personally telling you. Often, when the time is right, a teacher will appear nearby. Yogananda stressed that one must not be timid in one's approach if one wishes to attain self-realization. Yet many students are so timid that they refuse to consider anything that is not in the printed lessons, and they are blind to their final instructions. It's kind of like learning how to read, and then, instead of using that skill to read great texts on religion and philosophy, just reading the same ABC learn to read books over and over again, because those are the only ones your teacher used in school.

One must not be timid in one's approach if one wishes to obtain self-realization. One must thirst for knowledge. One must seek it unceasingly. One must develop and trust a deep intuition for what is right. One must expect results. One must overcome any fear that one is not deserving of the sweet nectar and the great prize.

Two things that got my attention in recent days are reservations for BC/OBC and the rains that started troubling some of indian cities.

Reservations, its very much confusing for me, why they are raising this issue now and govt is looking forward to implement more resevations in premier institutes of india like IITs,IIMs, IISc, AIIMS etc. I was thinking that politicians say all stupid stories and promise the world in their election manifesto. I have not seen any party that came to power doing some thing seriously on what they promised to people before election. But to it is surprising to see the hectic actions of central govt. to implement the reservations. The striking doctors and tech students really troubled some parts of the country. Many govt hospitals didnt function at all for some days and poor patients were suffering.

It is always the poor who suffer come what ever may be it is!


The rains, last time Bombay suffered a lot. There is no proper planning of drainage systems in many of our indian cities. Bangalore too, is will have to face the wrath with heavy showers.

Personal side, I am happy to see my parents moving into the newly constructed house in my village. It was tough task for me to build a house for them but then its done.
I am happy about it.
Posted by Hari Mallepally at 9:29 AM No comments: