To Telangana or Not Telangana 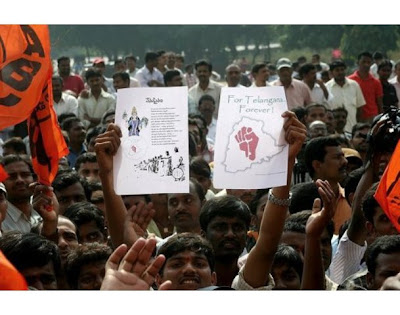 This is a million march question for the people ofAandhra Pradesh. With no signs of new state formation in the immediate future, the struggle for telangana statehood is now not in one man's control. Students, employees etc are now are often active with various activities.


For me the question of statehood is primarily secondary issue. It is because if formation of state alone gives development, I am all game for it. But the fact is far from statehood formation alone.

Northern parts of Telangana is better with water irrigation etc. southern districts are poorer with no proper irrigation water facility. So after Telanagana formation, there might be fight within Telangana about distribution of funds and resources for development. Even more important thing is that the same leaders who are now asking Telangana or united andhra were (and are) pretty much ruling andhra pradesh most part of their political career and still have strong investments and business relationships from Telangana and non telangana parts of Andhra Pradesh.

On the political side, the issue more for the survival of the political leaders from this area. No one wants to lag behind so they blame government and they say they will resign. One rich minister recently sent his resignation to Party president in Delhi (I am not sure if he is not that educated that resignation letter should be sent to CM /Governor) and then was happily appearing in assembly later. Resignations of everyone for this cause are highly enacted.

People are not ready to listen to these junk leaders. If we have to go by the word of these leaders, we are supposed to have Telangana may be a decade before.It is pretty much common for these leaders to give a dead line just to make announcement for another deadline later.

I think the fight becomes intense once Telangana is formed,because once Telangana is given there will be struggle for power and every one want to get some gains. Some student leaders might be eying for political entry and that could be primary source of inspiration in creating chaos now and then in Hyderabad.

Same junk leaders will be there even if statehood is announced. Britishers left india and everyone said they have looted many things from India. But I think the loot that happened after India got freedom is worse then what Bitish have done to India in their 200 years of presence in India. Samething will happen in Telangana. The people will be loosers whether there is Telangana or no Telangana.

I some times wonder, should we really ask for STATE alone. Why not ask for country? make every district as a state and we got a big city Hyderabad to be our national capital. I am not sure why no one is thinking for separate nation :-). 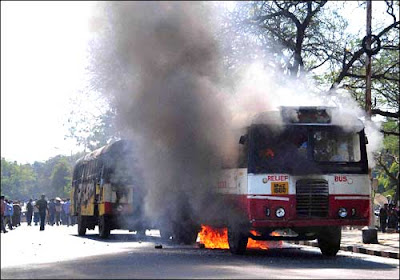 It is all for money and power. No leader cares for the real people and no person really cares for the leaders. People are busy in they struggle for survival and they don't have any time to look upto leaders for inspiration for development. Leaders are busy increasing they financial portfolios and for protecting their wealth, now they are either in favour of Telangana or united andhra.

As a common man, what worries more for me is the Bank EMIs I need to pay and my children education. Whether Telangana or not is not going to change my life in anyway. Well same should hold good for my father as well who is still a farmer and struggling to make something out of agriculture.

What we need is able administration and reduce the corruption. There are lot of good thoughts going around something like the Cash Transfer instead of subsidy items. Central government is planning to introduce the Cash Transfer to individuals and shut the ration shop system. This is the same concept chandra babu naidu fought last elections as their main party agendra.Unfortunate thing that Chiranjeevi spoiled babu hopes with new party splitting votes. Now chiranjeevi has become a big joker of politics. I think the Silent revolution that he was talking about was starting a party and then merging it with congress. If Telangana is formed, TRS may be merged with congress. Jagan is yet to understand politics. He is just shedding out the corrupted money his father has earned for him. But time will come for him to become another political joker.
Posted by Unknown at 9:32 PM

Email ThisBlogThis!Share to TwitterShare to FacebookShare to Pinterest
Labels: telangana